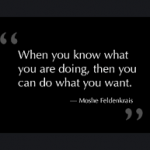 Whim or calling? I didn’t know so much about the Feldenkrais method of somatic education but it kept cropping up in my life, indirectly over many years, and more directly over recent ones. My friend Kristin Fredricksson is a practitioner and variously it appeared in texts I was asking my students to reference. I have long wanted to engage in some kind of somatic practice or method to underpin my practice as a performer and teacher. My interest in spontaneity and improvisation practices like Contact Improvisation and Action Theatre have led me to consider the possibilities Feldenkrais might afford me. So, I decided to jump onto the London professional training which is run by Scott Clark and led by Elizabeth Beringer.  The training began last year and I joined Easter 2012 after only a little experience of having lessons in Awareness Through Movement and Functional Integration. The method invites us, through gentle movement, to engage more of our bodily systems in everyday movement, heightening awareness so that we begin to reorganise our consciousness of movement leading to more efficiency and ease.

Go to my page Feldenkrais Links for more information.